Another voiceover fro G Fuel. This time a Christmas special!

G Fuel has always had a wacky sense of humour and brand personality. So, when they told me they were working on a commercial for their new flavour called Faze Rug's Sour Blue Chug Rug, I didn't even bat an eyelid! There's something about Christmastime that draws out advertisers' poetic sensibilities and many of the commercials I voice over the Christmas period all have rhyming couplets in them! However, I wouldn't have guessed on ever voicing a poem about Faze Rug's Sour Blue Chug Rug... I really like how the ad came out, though. If you'd like to see my other work with G Fuel, check out my G Fuel Golden Apple Pear ad. 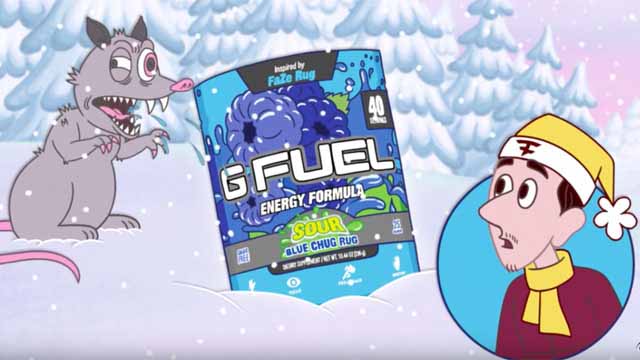 A Little More About G Fuel

G Fuel is one of the biggest energy drink companies in the world and they've achieved their success by selling the formula for the drink, instead of the selling the beverage in a can or bottle. Another thing that separates G Fuel from other energy drink companies is that it puts significantly less sugar into its products. This means that G Fuel can legitimately claim it is healthier than most of its competitors. G Fuel also has the impressive claim to fame of being the official drink of esports. These factors (and the company's wacky sense of humour) have helped it become successful very quickly! I have enjoyed working with G Fuel in the past and I look forward to working with them in the future!

If you're working on a commercial, an explainer video, or perhaps even a computer game trailer and you need a tried-and-tested voiceover artist, please feel free to get in touch. I am always keen to hear from new companies and I'll be happy to provide a free voiceover sample from your script.